There can’t many horror scenes quite as nightmarish – or cliché – as that of corpses rising from their graves.

But as unbelievable as it may sound, this was the actual eyewitness report of two London teens back in 1963. The two girls claimed to have encountered the surreal scene late one night, upon passing by a local cemetery after an evening with friends. The cemetery in question being none other than the notorious – and long abandoned – Highgate Cemetery.

One may be tempted to suspect that when the girls said they ‘saw friends’, what they really meant was ‘met in the park for some cheap cider’. Which could certainly go a long way to explain this pretty incredulous sighting.

But what’s even more surprising is that they would be far from the last to make bizarre claims concerning Highgate Cemetery. Just weeks later this report would be followed up by that of a young couple who also had a chilling experience while walking past the gates to the North Cemetery. In this case though they would not see the dead rising from the grave, but instead encountered a black, floating mass with a hideous pale face.

This terrifying spectre would be witnessed again on numerous occasions over the following months, appearing to horrified onlookers of all ages and walks of life. At the same time stories began to surface of bloodless animal corpses being discovered within the cemetery walls by trespassers, prompting a piece of local folklore that would go down as one of the most enduring supernatural mysteries in British history!

I am, of course, talking about the Legend of the Highgate Vampire. 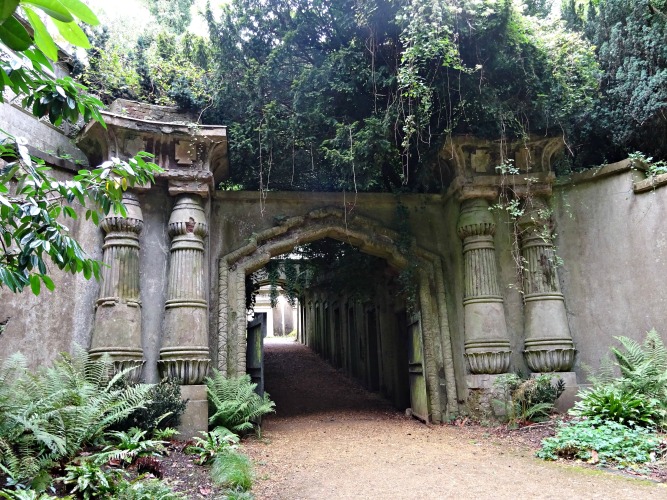 I’ve been incredibly intrigued to visit Highgate Cemetery ever since I first heard the tales surrounding it as a teenager. I love abandoned, creepy places and I’m obsessed with the paranormal, so Highgate Cemetery has been on my bucket-list for quite some time now!

I was therefore very pleased upon doing a bit of research to discover that it’s possible to visit the infamous West Cemetery through 70 minute guided tours. I’d visited the smaller East Cemetery earlier on, but it took me a while to get around to booking myself on to one of the limited tours for its spookier, more ‘haunted’ neighbour.

But shortly before Halloween I finally nabbed myself a slot on a midday tour, and was thrilled to be entering the lair of the Highgate Vampire at last! 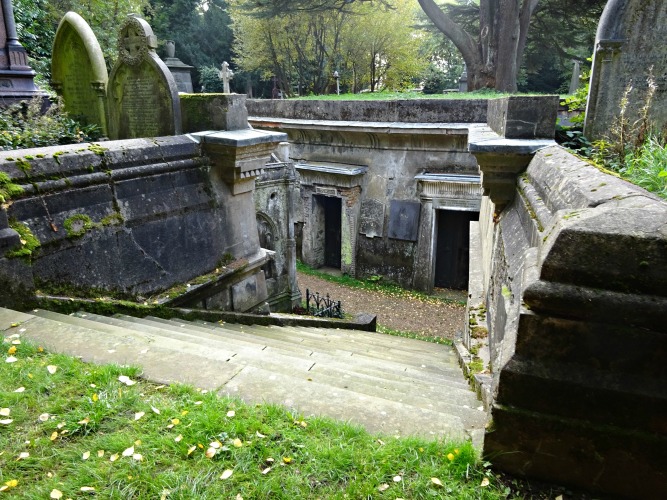 Built in 1839, Highgate Cemetery quickly became THE cemetery to be buried for any wealthy, self-respecting Victorian. Boasting dazzling architecture, two chapels and even armed guards patrolling the perimeter to deter body-snatchers, it really was the Ritz of graveyards! Anyone who was anyone would make Highgate Cemetery their final resting place, and at its peak the cemetery would see as many as 30 burials a day!

However, as Britain entered the first and second world wars the popularity of Highgate Cemetery declined. With thousands of young men dying in the trenches it suddenly seemed frivolous – and tasteless – to be spending exorbitant amounts of money on grand funerals and impressive headstones.

The demand for lavish funerals decreased, and with it the profits the cemetery had previously been accumulating. By the 1950’s revenue to support the cemetery had dwindled to nothing, and it was finally declared bankrupt in 1956.

Following this, what had once been one of the most sought-after burial sites in England now experienced decades of abandonment and neglect.

As grounds keepers and security left, vandals moved in, as did – it’s believed – devil worshippers. Graves and tombs were desecrated, and signs of satanic worship and even animal sacrifice were reported by trespassers exploring the cemetery. The most disturbing incident involving the discovery of the burned, decapitated remains of a woman near one of the many catacombs – believed to have been a human sacrifice.

And by 1960, the first reports of ‘vampire’ sightings were coming in, slowly at first but rapidly increasing in momentum as the rumours spread through the UK press. This ultimately resulted in a ‘vampire hysteria’ in the year 1970, led by two rather unusual public figures; occultist David Farrant and self-proclaimed ‘Bishop’ and ‘excorcist’ Sean Manchester.

With Manchester claiming that the cemetery was besieged by a medieval ‘Vampire King’ (who, naturally, had been shipped from overseas and roused by Satanists) the pair actually went as far as organising a real-life ‘vampire hunt’ in the cemetery. Which was actually carried out, despite fervent police efforts to prevent it from happening.

It seems that very little came out of this hunt however, and Farrant and Manchester ultimately went their separate ways in 1974 following an ongoing feud, culminating in appropriate fashion with a proposed ‘occult duel’ on Parliament Hill. Which never actually happened.

Manchester has since gone on to write a book where he claims to have successfully found and beheaded the Highgate vampire, while Farrant has served jail time for mailing voodoo dolls to the police and is currently the head of the Highgate Vampire Society. Which is a pretty badass title if nothing else.

Now in 2016, the cemetery has been restored to much of its former glory. Damaged headstones have been repaired, foliage trimmed and safe walkways laid down. It’s a very peaceful place that still remains largely overgrown too; much like a ‘forest’, as one American tourist commented to me during the tour. I even spotted a fox running around at one point – less than 15 metres away from us! Which even as a country girl is an unusually close encounter.

But nonetheless the cemetery still remains fairly creepy. Full of dark catacombs, limbless statues and a strikingly eerie ‘Egyptian Avenue’, it’s not hard to imagine a vampire skulking somewhere in the background.

So here’s the big question: do I actually believe that there was – or is – a vampire in Highgate Cemetery?

It’s an intriguing legend and one that’s endlessly fascinated me, but I do feel it’s a ‘legend’ nonetheless. I certainly wouldn’t argue against the existence of malevolent or restless entities stalking the shadowy paths of Highgate Cemetery. I just don’t think that a vampire is one of them. 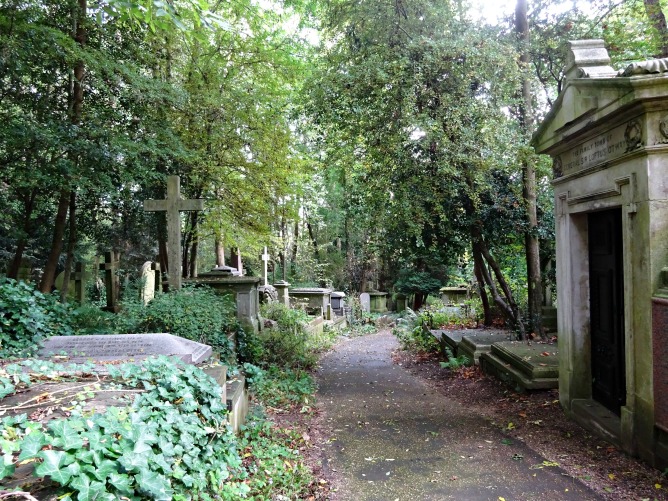 That said, there was one spooky story our guide had to share with us during the tour…

Following a brief talk inside a rather spooky mausoleum our guide told us how, in previous years, he always used to head-count the visitors in and out of the mausoleum to make sure everyone was accounted for. This was until one day when he counted 18 visitors entering the mausoleum, and 19 people leaving it. He’s avoided doing head-counts ever since.

Before I finish this post I just want to let you know that week-day tours of Highgate West Cemetery can be booked online by clicking this link! Drop-in tours are also available at the weekends, but do fill up very quickly.

Highgate Cemetery is now entirely volunteer run and maintained, so it completely depends on the money it makes from tours and donations to keep going! The volunteers do a fantastic job for no pay, and it would be a real tragedy to see its gates locked once again because of lack of funds!

So if visiting one of London’s most haunted cemeteries sounds like your cup of tea, do support the Friends of Highgate Cemetery by paying it a visit! Don’t pass up the opportunity to visit one of the spookiest and unique cemeteries the world has to offer!

I’m curious; what are your verdicts on the Highgate Vampire? Is it real, or just a legend? Do let me know your thoughts in the comments!

I Visited the Jack the Ripper Museum (and loved it!)

5 Unmissable Literary Museums to Visit in the UK!

The Cheap and Delicious Guide to Eating in Japan

10 thoughts on “In to the Lair of the Highgate Vampire”