Our world is a very big and incredibly strange place. Tucked away in every country are little pockets of weirdness; places that continue to draw travellers in with their strange tales, unusual origins or plain spookiness.

So in celebration of this I’ve put together a list of just a few of the strangest – and creepiest – places on the planet!

But beware; these locations are not for the fainthearted!

When Parisian cemeteries began to overflow in the late 17th century, the French government came up with a very novel solution. Instead of disposing of human remains by burying them in the ground, why not use them the line the walls of a series of underground quarries?

Well this was exactly what they did, and the macabre results can still be seen today!

Enter the gloom of the Paris Catacombs and you will behold the surreal sight of countless human bones piled against the walls in a bizarrely decorative fashion! Rows of skulls form neat lines along the walls in some areas, while scattered bones lie in haphazard piles in others.

It’s estimated that the remains of around six million people are interred inside this subterranean labyrinth, and much of the limestone tunnels are now out-of-bounds to the public. This still doesn’t stop them being a popular exploration zone for so-called ‘catophiles’, with as many as 300 people entering the catacombs illegally every week!

The decline of a villages population is always a sad sight for its older residents. But when 67-year-old Tsukimi Ayano witnessed a dramatic decline of residents in her village of Nagoro, Japan, she decided to do something about it. By which I mean she began creating hundreds of scarecrows to replace them.

Nagoro is now populated by over 150 of Ayano’s handmade creations, many of whom are evencreated in the likeness of deceased residents. Scarecrow children are the only students in attendance at Nagoro’s tiny village school, while crowds of these lifeless figures wait patiently at the local bus stop or reside in homes and shops.

There are many words you could use to describe this so-called ‘Scarecrow Village’; strange, sad – even unnerving! But the irony is that the village’s odd new residents are actually bringing more visitors to this remarkable town, as people flock to see it for themselves!

I think we can all agree that mannequins anywhere are pretty spooky! But this aura of creepiness only gets worse when they reside in a house overlooking the site of a deadly 1871 train crash, and inexplicably change clothes and position overnight.

This is the case at the John Lawson House in New York; an 18th century property situated near New Hamburg Station. Seemingly occupied by no-one save for a group of life-sized female mannequins, no living person has ever been seen entering or leaving the home. Yet the mannequins somehow mysteriously disappear from the house’s porch every night, only to return the following morning redressed and re-posed. Sometimes pointing towards the historic crash-site, and sometimes staring at the other remaining historic properties that line the street.

But whatever the explanation, the riddle of the John Lawson House mannequins came to an abrupt end in 2016 when they disappeared from the house along with their mystery caretaker. Will they ever make a reappearance? Only time will tell.

4. Island of the Dolls (Mexico)

The fear of dolls in so common there’s even a name for it: pediophobia. And those with this specific phobia will certainly want to steer clear of a small island just south of Mexico City, known locally as ‘Isla de la Munecas’ or the ‘Island of Dolls’.

The story of how Isla de la Munecas came to be is unsettling enough to begin with. Following the discovery of drowned girl in a nearby canal, Julian Santana Barrera – a hermit living on the island – began hanging the dolls he found washed up on his island on trees around his home.

And he wouldn’t stop doing so for another 50 years, up until his own death in 2001. Drowned, relatives claim, in the exact same spot as the little girl.

Now this forest of decaying, dismembered dolls forms what’s surely the most ghoulish tourist attraction in Mexico! And to make things even worse many locals believe that the dolls are actually possessed, and can be caught giggling, whispering, and even moving their heads upon occasion.

In the strange world of the paranormal a wide assortment of locations and objects can apparently be haunted. Houses, forests, dolls….and even 70’s vending machines, it would seem.

As completely bizarre as this notion may be, it’s true nonetheless. Well, according to Seattle folklore anyway.

Located in Capitol Hill, this ancient vending machine has supposedly existed for at least 30 years, with nobody ever being captured refilling it. Despite this fact for a mere seventy-five cents it will dispense an array of vintage-sodas, many of which no longer exist! And which also thankfully appear to still be in date. I’ve yet to hear of anyone being poisoned by the Haunted Vending Machine.

So who’s refilling this mysterious machine? Just where does it get its discontinued flavors? Is it really haunted? Who knows. But I do know one thing; I’d certainly love to give it a whirl!

Burial practices vary widely across the world, but the burial practices of some are more unusual than others. This is certainly the case for the Igorot tribe in the Northern Phillipines, who have a rather extraordinary way of bidding farewell to their deceased loved ones. Rather than cremating or burying their dead, they instead inter them in coffins nailed to the sides of cliffs and suspended many metres off the ground!

While this practice has largely diminished by the 21st century, it’s believed to date back at least 2000 years! It may seem unfathomable to some, but the tradition is actually linked to strong spiritual beliefs and love for family members.

It’s believed among the tribe that laying the dead to rest high up brings them closer to their ancestral spirits, and it’s also said that the higher a coffin’s placed, the greater the love expressed for the individual who’s passed.

But whatever its origins, the Hanging Coffins of Sagada still create a startling sight, that is sure to leave an impression on any traveler who happens to encounter them!

Just north of the Lithuanian city of Siauliai lies one of the most remarkable pilgrimage sites in the world! This humble hillside is home to a staggering 200,000 crosses; a lasting testament to the faith and bravery of one nation in the face of overwhelming oppression.

While the legends regarding the hills religious origins conflict, we do know that the first crosses were laid in the 1830’s, following a deadly and unsuccessful uprising against the Russian tsar. Without bodies to bury, the rebel’s families instead began leaving crucifixes on the hillside as an act of remembrance.

Over the following decades citizens of Lithuania continued to risk their lives leaving crosses on the hill; a dangerous move considering the fierce religious chokehold Russia had on the country at the time.

Followed Lithuania’s regained independence the Hill of Crosses has since become a popular pilgrimage site, with new crosses being added all the time. This has resulted in the most impressive (and eerie) collection of crosses in the world, which only looks set to increase over the following decades!

There are few places so irrefutably creepy that they’ve gone on to inspire a best-selling horror-game. Well if you’ve ever wondered about the inspiration behind the legendary Silent Hill, you’re about to find out!

If you visited Centralia, Pennsylvania, back in 1961 you would have found a bustling mining town, home to around 1,000 people. But visit today and you’ll be greeted by a place so impossibly surreal it’s like something straight out of a horror movie!

The roads are cracked and swollen, and sulphurous gases hang in the air as dense as fog. Most of towns homes and shops have been demolished and reclaimed by nature, and a mere ten residents remain.

So what on earth could have brought about such a nightmare scenario? An underground fire that’s been burning for over 50 years, that’s what! This fire was started deliberately as an effort to burn a landfill site, but disaster struck when it also ignited a long series of coal-mining tunnels and rapidly spread out of control.  And with the fire expected to burn for another 250 years, the situation in Centralia seems very unlikely to change any time soon…

When you hear the words ‘fetish market’ you may be inclined to imagine some sort of giant, outdoor sex shop. But alas no; the reality is much more terrifying than that!

Located in Lohme, Tongo, the Akodessawa fetish market is the biggest voodoo market in the world! Here you can find everything from rotting animal heads to skins, talismans and herbs. There are even dark rumours floating around of human skulls being found for sale among the other macabre goods.

Serving as a kind of gruesome supermarket for voodoo practitioners, the market’s also a place where you will find an array of voodoo priests and healers offering cures, charms and even readings of your future!

While this may all seem quite sinister to Western eyes, voodoo is in fact the mainstream religion in Tongo, where many people opt for spiritual or herbal remedies over conventional medicine. Nonetheless, this is one shopping experience that is definitely not for the fainthearted!

The Capuchin Catacombs in Palmero were originally constructed in the 16th century to inter the bodies of monks, but later expanded to include the wealthier citizens of Palmero. With rooms specifically dedicated to groups such as religious figures, professionals, women and children, an estimated 8,000 mummified bodies now fill the catacombs in varying states of decay.

All impeccably dressed in their Sunday best, the majority of these bodies were mummified naturally by the dry atmosphere of the tunnels. But other bodies were purposely preserved, such as the body of two-year-old Rosalia Lombardo, which has barely changed since the day she died!

As gruesome as the experience may be, the catacombs now serve as a morbid but immensely popular attraction for thousands of tourists every year! Because nothing rounds up a romantic trip to Italy quite like exploring a tunnel full of rotting corpses…

What do you think was the weirdest place on this list? Have you experienced weirder? Do let me know in the comments! 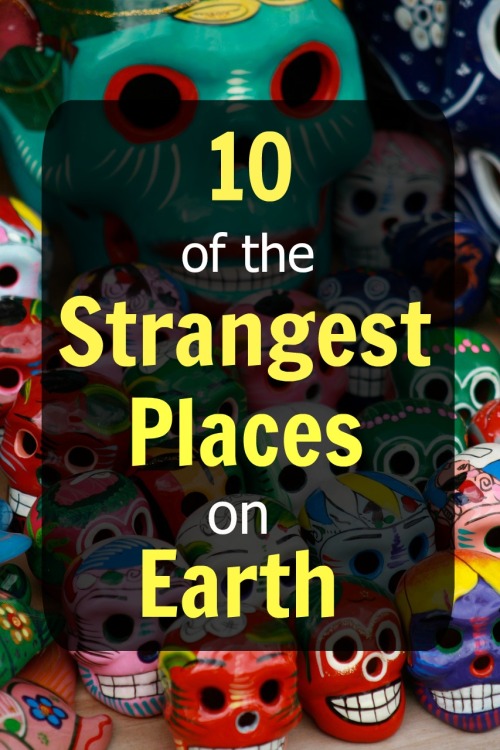 If you enjoyed this post why not check out:

The Monster Hunter’s Guide to the USA

30 Top Tips for Traveling to Japan!

The Beauty in Ruin: St Dunstan-in-the-East

10 thoughts on “10 Of The Strangest Places on Earth”