If there’s one thing that never fails to draw me in, it’s rumours and legends about hidden places. To me, anything that’s concealed from sight begs to be explored, and if it’s got 500 years of history and ghost stories attached to it then all the better! So it should come of no surprise that when I visited in Edinburgh back in 2015, The Real Mary King’s Close was one of the first attractions I headed to.

What is Mary King’s Close?

In short, Mary King’s Close is the name given to long a series of sprawling, underground tunnels that worm their way through Edinburgh’s Royal Mile. In the modern-day these mysterious tunnels are tucked away underneath imposing government buildings. But if you traveled back 400 years you’d discover a bustling community hub filled to the brim with families, shoppers and successful businesses!

Originally starting life as a solution for mass overcrowding, these cold, stone vaults took on a life of their own over the centuries, and will forever remain one of the most fascinating aspects of the cities murky past! And the local legends of murders, disease and even a handful of hauntings makes this an ever more intriguing place to investigate.

Today the only way to enter this elusive underground world is via a paid tour, which will (literally!) walk you through the tales and history of this legendary close. During this hour long tour you will hear (and see!) how the occupants of Mary King’s Close lived, worked and even died within the confines of its walls.

On one hand, Mary King’s Close was the site of great splendour. In an area known as Allan’s Close, lavish apartments were once owned by the wealthy and successful, a lifestyle that can still be glimpsed today. Faded, floral patterns are still visible on scraps of plaster clinging to the wall; the remains of plush 18th century decorations!

Another (rather amusing) anecdote about the wealth that once existed in the close involved the installation of the close’s first working toilet. Its owner was apparently so proud of it that he took to leaving his front door open so everyone could see him, uh, taking care of business. Quite the mental picture!

But it unfortunately wasn’t all fancy wallpaper and posh potties in Mary King’s Close. The poverty and disease that so riddled so much of Edinburgh inevitably made its mark, no more so than when the Black Death tore through the country 1644.

Like much of the Scottish population, a sizable chunk of the close’s residents wouldn’t survive to see the end of this plague. Those unfortunate enough to contract the disease would be confined to their homes, receiving daily deliveries of food and coal to sustain them. These, and regular visits from the terrifyingly attired plague doctors. Whose gruesome treatments did nothing to ease the suffering – or eventual deaths – of their patients.

One room on the tour recreates a plague-doctors visit, and has probably got to be the eeriest stop on the tour. But while we’re talking about eerie rooms – and the plague – there’s one very curious tale I’d like to share with you.

The ghosts of Mary King’s Close

If you visit Mary King’s Close, about halfway through your tour you’ll arrive at a rather peculiar little room. Stacked to the rafters with dolls, teddies and cuddly toys, it’s known as ‘Little Annie’s Room’, and is said to be haunted by the spirit of a young plague victim. Abandoned to die by her mother in the tunnels, Annie’s lonely ghost is believed to have forever remained there, anxiously awaiting her return and endlessly searching for her beloved doll.

In an effort to comfort this sad little ghost, visitors began leaving toys and dolls behind as gifts. This may or may not have worked, but it’s still not unusual to hear of young children asking their parents who ‘the little girl’ in the room with them is.

And ‘Wee Annie’ isn’t the only spook to lurk the confines of Mary King’s Close! Other supposed ghosts include that of a ‘worried’, pacing man and a 16th century plague doctor, as well as a shadowy, female spirit. Many believe this to be the ghost of Mary King; a prominent 16th century businesswomen whom the close was later named after.

But ghosts or no ghosts, Mary King’s Close is an undeniably spine-chilling place to visit. Cold, gloomy and crumbling, it’s difficult to remember that this place was once alive with light, colour and laughter. It’s also very hard to picture that it wasn’t always underground; the buildings covering it only actually being erected in the 1800s.

It feels very much like its own secret, subterranean realm. It’s fascinating place to explore by day, but not a location I’d ever want to spend the night. Mostly because I fear that if I did, I wouldn’t find myself alone.

The Real Mary King’s Close can be found on Edinburgh’s Royal Mile, and an adult ticket will cost you £14.50. It’s an unmissable attraction for anyone with a love of history or ghost stories, but be warned; it’s certainly not for the faint-hearted!

Have you visited The Real Mary King’s Close yourself? I’d love to hear your thoughts in the comments!

And if you’re searching for fascinating historic attractions in Edinburgh, why not also check out my Guide to Edinburgh Castle?

Pin me for later! 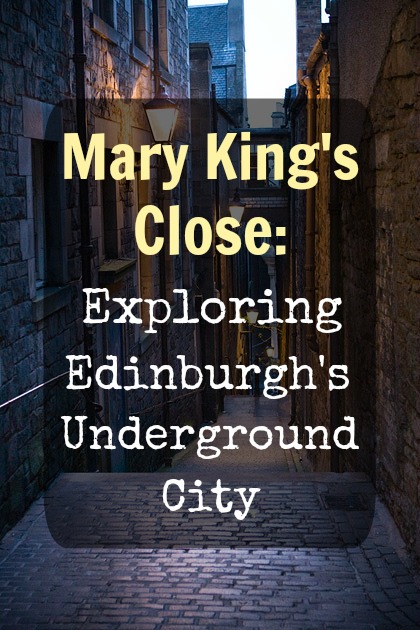