You’re winding your way through narrow, musty tunnels in total darkness. There’s no other people, and no other sounds except your anxious breathing and the crunch of fallen rubble under your feet. That, and the occasional crack of bones. For it’s not just debris that scatter your path, but also the splintered remains of actual human bones.

And when you raise your torch to illuminate the walls around you, things only get more horrific. Hundreds of grinning skulls, leg bones and other skeletal remains line the tunnel walls in a nightmarish wallpaper. And this hideous scene is repeated nearly every turn you take; the bones of over six million people entombed all around you.

And the most chilling thing of all? If you can’t find your way back through this treacherous maze, you’ll join them. After all, no one can hear your screams 20 feet below ground…

What on earth have I just described? The setting for a horror movie? The lair of a grisly serial killer?

Well I hate to horrify you further but no; this is actually a very real place. It’s known as The Paris Catacombs, and is officially regarded as one of the scariest places on the planet!

The Macabre History of the Paris Catacombs

17th century Paris had a problem; their cemeteries were so full that bodies were literally bursting from the ground. Which is pretty gruesome to begin with, but gets even worse when you consider the inevitable spread of disease that rapidly followed.

So to solve this rather smelly and unhygienic problem, the Parisian government came up with a peculiar brain wave. Why not inter these troublesome corpses in the old limestone quarries that wormed their way underneath the city?

And this is exactly what they did. Over the course of a century these 186 miles of unused tunnels were transformed in to a ghastly makeshift ossuary. In fact by the time it was finished this enormous space contained the bones of a staggering 6 million people!

The last remains were laid to rest in 1860, but this makeshift resting place was not to be left in place. Seven years later the tunnels would be opened up to the public. The Victorians loved nothing quite like a bit of macabre tourism, and thousands flocked to witness this bizarre and chilling spectacle for themselves!

And time’s done nothing to dampen Paris’ fascination with this unsettling piece of their history. On the contrary this interest has only grown, attracting many spooky tales and urban legends along the way! And even, it would appear, it’s very own group of devoted explorers.

While the catacombs may have been accessible to all in the late 1800’s, 2016’s a whole other story. Today the grand majority of the Paris Catacombs are off-limits to the public. Crumbling ceilings, vandalism and the frightening potential to get lost have led the government to severely restrict public access, making it a criminal offence to enter the tunnels without permission.

But the threat of hefty fines still hasn’t stopped hundreds of so-called ‘Catophilles’ entering the tombs illegally every week. Urban explorers who love this subterranean labyrinth so much that parts now resemble a miniature city! Underground bars, clubs and even makeshift swimming pools have popped up over the decades, as catophilles continue to make this ghoulish haunt very much their own.

But those who wish to visit the Catacombs legally will be pleased to know that’s also very possible. Official guided tours of small sections of the catacombs are run daily, and remain one of the most popular tourist attractions in the city!

Legends of the Paris Catacombs

Needless to say for a place so terrifying, the Paris Catacombs have gathered a fair number of ghost stories over the centuries. The most famous tale concerns Charles Alex Guillanmot, the architect responsible for the construction of the catacombs. In death his spirit is said to forever remain there; trapped by all the angry souls whose rest he disturbed.

Other rumours from urban explorers tell of cold spots, the icy touch of unseen hands and even devil worship occurring in the tunnels! It’s also said that many visitors become extremely emotional while inside the catacombs; driven mad by the shadowy entities that call it home.

Whether these rumours are true – or simply the result of fear and claustrophobia – is uncertain. But if we can be sure of only one thing, it’s that this is one location you don’t want to explore on your own!

What’s the scariest place you’ve ever explored? Do let me know in the comments!

And if you enjoyed reading all about the Paris Catacombs, then check out my post 5 Nightmarish Places You Don’t Want To Visit, for even more terrifying destinations!

Pin me for later! 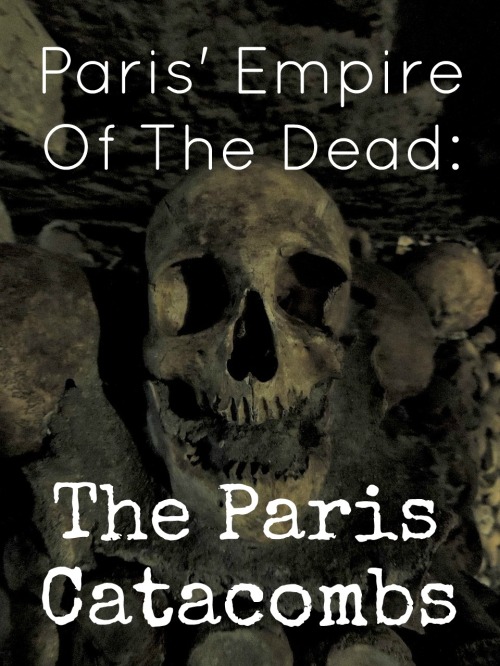 24 thoughts on “Paris’ Empire Of The Dead: The Paris Catacombs”